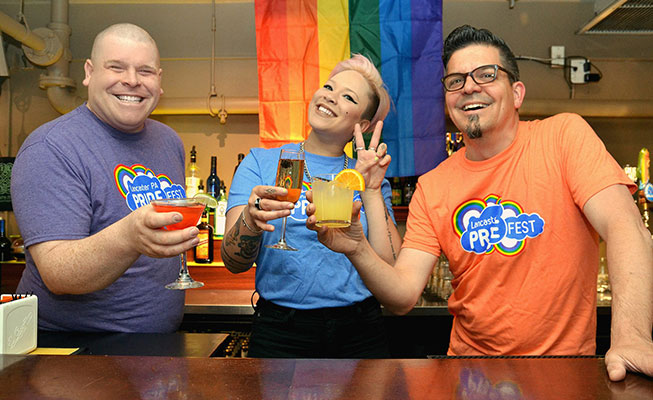 To wrap up Pride Week 2017, the organizers of Lancaster Pride Fest (this Sunday at Binn’s Park from noon - 6 p.m.) are gearing up for the biggest event ever in the festival’s 11-year history.

Zac Nesbitt, festival co-organizer along with Rowena Stein, says they’re particularly excited to implement one of the most important pieces of feedback they received after last year’s festival: American Sign Language (ASL) interpretation for the entire festival, from the speeches to the music to the drag shows.

Musical performances will include the dance-inducing PA Mambo Orquesta, as well as Lancaster treasure Bobbi Carmitchell, the singer/songwriter who stunned the crowd last year with a heart-rending performance of a song she wrote as a tribute to those we lost in the 2016 Orlando tragedy.

Zac says that Lancaster Pride Fest’s relaxed, hometown vibe is what draws people to our city’s event. “We’re the lowest price in the region [at $5], and people get all the same things they would at a bigger city’s Pride Fest, but with our small town hominess.”

People come into Lancaster from 3-4 hours away in all directions, says Zac, adding that one piece of feedback from last year sticks out for him in particular: a Facebook comment left by a Philly resident on his way to Lancaster Pride Fest via Amtrak, because in their words, "I'll just hop on Amtrak and head up to Lancaster Pride, where there is a community that knows how to get along".

Come find us at Lancaster Pride on Sunday 6/25 between 12 - 6. Have your professional portrait snapped, share your story to be part of our film or just come say hi! We'll be across the street from Binn's Park towards the back.
Find Us

Places to Stay, Things to do in Lancaster PA© 2022 Visit Lancaster PA, All Rights Reserved.